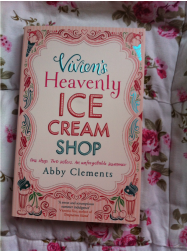 WARNING: Do not read this book unless you have a tub of ice cream with you.

This cover is the best cover I have seen this year. My favourite colour is pink and mixed with teal’s and green’s, well it’s just heavenly really!!

I have been looking forward to this book since I first saw the cover and I was so excited when it landed through my letterbox. I started it as soon as I possibly could and devoured it in under 24 hours (I would have read it in one sitting if I hadn’t been so tired last night!) I was rather frustrated to begin with though and the reason for this was because of the repetition of the word ‘said’. Every conversation was littered with she said, he said etc and it started to get on my nerves, on just one page I counted 7 ‘saids’! Now whilst this might be a tiny thing, it did start to distract me from the plot as I was more worried about the ‘said’ frequency!

HOWEVER, with that said (see what I did there?!  ) I put the book down and I went to bed and when I woke this morning I started up with it again and I couldn’t put it down. I instantly became drawn into the characters lives and I found myself completely immersed in the plot.

Two sisters Anna and Imogen are heartbroken when their beautiful grandmother Viv dies. In her will she has left her dilapidated ice cream parlour called Sunset 99′s to the two sisters and immediately they can’t think of anything worse. Imogen wants to travel the world and Anna is busy with her own job. The two sisters have to decide whether they should carry on with their own lives or whether they should honour their grandmothers memory. What follows is a glorious summer filled with ice cream, festivals and Italian men!

I enjoyed this book so much and I had happy tears in my eyes as I turned the final page. It was such a beautiful story line that really captured the magic of the English seaside. The character’s of Anna and Imogen were both so easy to fall in love with and all of the other characters that we are introduced to along the way were also beautiful.

I cannot recommend this book enough! Once I had got over my ‘said’ obsession, I was able to really appreciate the magical plot and the fantastic characters.

This book deals with love and loss, heartbreak and new love, the importance of following your dreams and most of all, ICE CREAM!!!