Waking Up In Vegas - Romy Summer 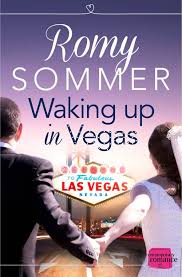 
I was first attracted to this book by the wonderful cover and was quite excited to start reading a book from the new imprint ‘Harper Impulse’. This was quite a different book from what I imagined it would be. It was a cross between the Katy Perry song ‘Waking Up In Vegas’ and The Princess Diaries by Meg Cabot.

Phoenix, a cocktail waitress, wakes up one morning, in Vegas, with glitter on her clothes (as Katy Perry sings, ‘get up and shake the glitter off your clothes, that’s what you get for waking up in Vegas!’). She is in bed next to a rather attractive man but how did she end up there and why does he keep calling her his wife?

Phoenix soon learns that, after a heavy night of champagne, she has forgotten everything that happened and can’t remember marrying or even meeting the man next to her! He seems to be totally in love with her and is planning their future. All Phoenix wants to do is go home, have a shower and go back to bed.

The man turns out to be called Max and has a bit of a secret…he’s not all he seems to be. Phoenix must decide whether she wants to leave Max and file for a divorce or give the man a chance and work out why she decided to marry him in the first place.

I really enjoyed this authors writing style; it was easy to read and the pace and flow was perfect. This was quite a surreal book in places; it bordered on the fantasy boundary but was deep seated in reality for the most part. I enjoyed the characters of Phoenix and Max. In the beginning I didn’t like Max at all but by the end he was a serious sex god and I was pretty desperate to be in Phoenix’s shoes! I liked how defiant Phoenix was and how she didn’t just give in, she fought hard for what she wanted and was a true independent woman!

This was quite a short novel (on my e-reader it was only 145 pages, but my e-reader is rubbish with page numbers, I think it was a little longer than that) so it takes hardly any time to read. This would be a great read for the beach or sitting in the garden.

I look forward to more books from Harper Impulse and Romy!