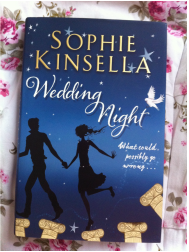 Sophie is the Queen of chick-lit, so much so that people don’t even need to know what her next book is about before they have pre-ordered it. When I saw her latest novel was called Wedding Night I cheered loudly for a few reasons. Firstly, it’s a new book by Sophie. Secondly, it has wedding in the title and I love nothing more than a good wedding and lastly, it was due out so soon.

I was lucky enough to receive a copy of this book from Transworld and as soon as it arrived on my doorstep I was eager to start. Unfortunately it had to go on my TBR pile as I had a few books to read before it, but every time I walked past my bookshelf it was sitting there saying ‘READ ME’ ‘PICK ME’ ‘I WANT TO BE READ’. So I caved in and picked it up.

It started out quite well for me, I was hooked quite quickly and I was really excited to see what was going to happen. However, just as quickly I started to *whispers* get a bit bored and I just don’t know why. I just wasn’t very interested in the characters lives, I didn’t much care what would happen to them and therefore found myself struggling to keep reading. This book has had so many reviews that range from awful to brilliant and I think I am slap bang in the middle. I didn’t hate it but I wouldn’t read it again. Some people have commented that they didn’t like it because it was the first time Sophie had used more than one POV but if I’m honest that didn’t bother me in the slightest, in fact I quite enjoyed seeing the story through the different characters eyes.

Was this book funny? Yes and no. Some parts I did think were pretty clever and I found myself laughing but other parts I just felt like it was trying TOO hard to be funny.

The plot is based around two sisters called Lottie and Fliss. When Lottie and her long-term boyfriend split up over not getting married, Lottie quickly heads into a re-bound relationship and wants to get married to an old flame called Ben. Fliss is determined to stop her sister from making the biggest mistake of her life and tries to show Lottie that she doesn’t actually love Ben. We follow Fliss and Lottie as they both try to get what they want. Along the way they both learn things about themselves and each other and both realise the importance of real love.

I WISH I could say that Sophie has once again nailed it and written an amazing book but I just can’t (and it pains me so much to say that).