When You Walked Back Into My Life - Hilary Boyd 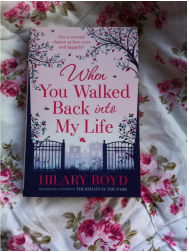 Hilary Boyd is an author I’ve heard about but an author I’ve never had the chance to read. When her latest novel arrived in the post I was so happy! The cover is gorgeous and instantly made me eager to pick it up and read.

When You Walked Back Into My Life follows the life of Flora. Years ago, Flora was head over heels in love win Fin McCrea but one day he vanished and never returned. She spent years pining after him but eventually realised that he was scared of commitment and had gone to spend his life climbing mountains: his one true love. Flora has just about moved on and pulled herself together, dating new men and getting a new job looking after an elderly lady called Dorethea. Unexpectedly, Fin arrives back in her life and she has to decide whether she can give her heart to him again or whether to say goodbye once and for all.

Flora was an interesting character. In the novel she is supposed to be in her early forties, but, when I was reading, it felt like she was in her late twenties. I found quite a lot of her behaviour quite immature for a forty something year old, she seemed quite naïve at times and a little un-worldly for someone of her age. However, she was a protagonist who I formed an automatic bond with and as the novel progressed I began to care about her more and more. Fin was a challenging character; I didn’t like him from the moment I met him and was shocked and appalled by quite a lot of his behaviour throughout. Dorethea’s character provided a sub-plot but asides from a small portion of the novel at the end, it didn’t feel like she served much of a purpose. She was just kind of there; we never got to know much about her at all. It would have been nice if her past could have been explored a bit more instead of hinted to ever so slightly.

I found Hilary’s writing to be easy to read and had a nice pace to it, I found that the further into the novel I got, the more I wanted to carry on reading; it took a little while to get into. The cast of characters were well crafted for the most part and I was eager to see whether Flora would get her happy ever after. There were a nice range of topics covered in the novel and raised some moral questions which gave a whole new level to the story and they were all executed well. To go into more detail about these would ruin the plot, so I'll refrain from doing so!

I've warmed to Hilary as an author and if I get the chance, I will go back and read her previous books and I will certainly look out for any future novels from her.

A great chick-lit novel that will be perfect to curl up with during the winter months.