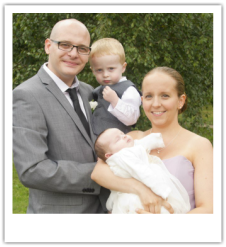 Kelly is one of the lovely reviewers for She Loves To Read and is a MASSIVE book addict! When she's not looking after her two gorgeous children you will find her with her head in a book!
You can read some of Kelly's reviews on the site and you can follow her on Twitter.
Kelly has written a lovely flash fiction Christmas piece and I am super excited to share it all with you.
Christmas is the time of good cheer, of friends and family, of giving and receiving. Christmas is the time of Santa Claus and jolly Christmas carols playing on the radio. Christmas is the time of bright twinkling lights and shiny tinsel. Christmas trees stand tall and proud, decorated in beautiful baubles of every imaginable colour and shape. Stockings hang above the blazing fire, waiting for the gifts that will soon fill them.

Christmas is the time of year when everyone gathers around the table to a feast of roast turkey with all the trimmings; roast potatoes, stuffing, pigs in blankets, sausage meat, oh how the mouth waters. Christmas crackers are pulled with a loud bang and a giggle, jokes are read and brightly coloured paper hats worn.

Well at least for some, these are the small and intricate details that lead to the perfect family Christmas celebration. But not for Harry Doofus…

See Harry is a bit of a loner, who this Christmas, as has been the case for the past 5 years will be spending Christmas alone, very much like a modern day Grinch. Harry cannot stand Christmas; he finds the idea of the gaudy decorations and overbearing joviality of it repulsive. Why would he want to celebrate this god-awful day, which holds so many bad memories?

See 5 years ago on Christmas morning, Harry was awoken by the sound of his wife’s screams from the ensuite bathroom. “Harry, come quick” Mary had called. Harry leapt out of bed as fast as he could, excitement coursing through his veins. Today, it was going to be today he thought.

“Yes, my love. Are you ok?” Harry asked Mary as he raced into the bathroom on this chilly Christmas morning. Mary was bent double, with her elbows resting on the bathroom sink. “I think my waters have just gone. I’ve been having cramps all night…. I think its starting Harry” Mary had replied.

Harry couldn’t believe the day had finally arrived. His wife was in labour and he was hoping it wouldn’t be too long until he finally got to meet his baby daughter. And on this magical day, could it be anymore perfect??

Harry helped Mary in to the bedroom, where she sat on the bed while he quickly threw on a creased up t-shirt and jeans, which had been tossed on to the bedroom floor the night before. The bags were neatly packed and lined up against the bedroom wall, where they had sat for the previous few weeks.

As they rushed from the house, bags slung over his shoulder, Harry could feel the excitement bubbling up inside of him. The drive to the hospital seemed to take forever, not helped by the fresh flurry of snow, which was currently falling.

At last Harry and Mary arrived at the hospital, rushing straight to the busy maternity unit where they were shown to a room and Mary was attached to a foetal monitor. Instantaneously the rhythmic sounds of their baby daughter’s

heartbeat could be heard, galloping like a horse. Mary was examined by a midwife, who announced she was pleased with the progress of Mary’s labour, escorted them round to the delivery suite.

“Oh Harry, it hurts. I’m not sure how much longer I can do this. I just want to meet our daughter” Mary had moaned. “Not long now sweetheart, your doing fantastic” Harry had replied while rubbing Mary’s back. They had only been at the hospital a few short hours and yet it had felt like a lifetime. But the midwife assured them that the labouring was progressing well and it wouldn’t be too much longer until they got to hold their daughter.

It was shortly after this that Harry’s life changed forever. Not that he can remember much of what happened during this time, the final moments of his wife’s life. For he seems to have blocked these memories no matter how hard he tries to remember.

It was late afternoon when his daughter Bethany was born, a tiny doll of a thing with a thick mop of dark brown hair. But something had gone wrong, the doctors later told Harry, that Mary had haemorrhaged and they had tried everything to stop it and repair the damage. Mary had died alone in an operating theatre while Harry cradled their beautiful new-born daughter on that Christmas afternoon.

How could the most joyous day of his life also be the worse day of his life? What was he supposed to do now? Harry knew for a fact though that Christmas would never be the same again. How was he meant to celebrate this day, the day on which he lost his wife?

5 years later and Bethany is the most beautiful, lively little thing. She looks so much like her mother Mary that at times Harry finds it hard to look at her sweet little face. But life goes on and Harry knows that he must make Christmas special for this beautiful little person, in who Mary lives on. But not this year… This year, as has been the case for the previous few Christmases, Bethany will spend Christmas with her grandparents. Harry will remain alone…