Dan Taylor Is Giving Up On Women - Neal Doran 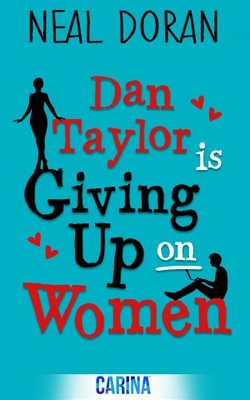 Perpetually single Dan Taylor is so terrible at meeting women his own mother suspects he might be gay. So best friends — and smug married couple — Hannah and Rob insist he needs some serious man management. Taking matters into their own hands, they decide to make him their ‘Project’ and set to work on finding him a girlfriend — one that might actually stick around long enough to meet his mother.

A new wardrobe, a better haircut and a slick online profile later and an unwitting Dan is ready to be launched on the London dating scene. But miracles don’t just happen, and when he does achieve some success with women, it’s not in the way anyone expected.


Wow, what can I say, I loved this book!! It had me laughing from start to finish, and I was sad to see it end. Doran’s easy writing style and subtle jokes leave you wanting more in this modern day love story and the unexpected twist at the end was perfect.

Dan Taylor is unlucky in love and Doran’s portrayal of him is hilarious and I couldn’t help but feel sorry for the poor guy. He is a well structured creation of a character that Doran should be immensely proud of. Dan’s ventures in to online dating couldn’t be more disastrous, It was so well written though that I could envisage some poor bloke in the world having the exact same luck in their search for love.

Then there is Rob and Hannah – Dan’s friends from university who married after a whirlwind romance during their first year of university. Not all is as perfect as it seems in their relationship, as Dan soon discovers, leaving him wondering whether love is all it is cracked up to be.

Doran’s debut novel is fantastic and I cannot recommend it highly enough. It is a must read that should appear on anyone’s TBR pile if looking for an easy to read, laugh out loud book, in which to lose themselves. I know I shall be eagerly anticipating Doran’s next novel.