Dating In The Dark - Pete Sortwell 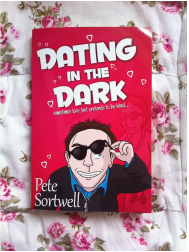 When Pete contacted me via Twitter to ask if I was interested in reviewing his latest book ‘Dating In The Dark’ I quickly jumped at the chance. After reading the blurb and deciding it sounded right up my street, Pete kindly sent me a copy through the post.

As soon as it arrived I dropped what I was doing and started reading (after all, with a pink cover and an exciting blurb, there wasn’t much else that could beat it) and I was so glad I did.

Jason is perhaps a little atypical for a man. He’s short (but not quite a midget), single, addicted to fish and chips, likes feeding the ducks and is on the ‘right side’ of 30. He’s baffled as to why no one has yet fallen in love with him and is on a mission to find that one woman who will love him forever. The problem is though that Jason is looking in all the wrong places (so his friend Barry says) so he has to change his tactic. After trying speed dating, internet dating and hanging about in a church he thinks it might just be time to use his ‘shortness’ to his advantage. He tries to sign up for a disability website but being just half an inch too tall to be considered a ‘midget’ he has to rethink once again. But wait, what about if he pretended to be blind….would someone else who was blind fall in love with him if they didn’t have to look at him?

With Jason’s new plan in place he finds a woman that he thinks might just be the one for him. What follows is a hilarious journey filled with copious portions of fish and chips, one rather crazy dog, a Russian taxi driver, a gay casino worker, a pair of dark raybans, some dodgy kebabs and a whole load of laughs.

This novel really is something. From the start I was in hysterics and that carried on throughout the novel. Although at times there were some sensitive issues which were dealt with really well, the didn’t dampen the comedic spirit. The whole premise of this book is original and the situations Jason finds himself in are really quite clever; I especially loved his complete lack of knowledge about being blind and what it entails.

There was a lovely romantic aspect too, with the moral of the story being a positive one and suggesting there is someone out there for us all, if only we remain true to ourselves (awww!)

Pete’s writing is superb. Funny, well paced, easy to read, perfect amount of description etc etc. Everything you want in an author!

My only criticism is that I wanted a longer book! I would have loved to know what happens next BUT I am under the sneaky impression that there will be a Dating In The Dark 2!! (waves arms in air)

A clever, witty, emotional look at what happens when you try to change to find your one true love.