How Not To Be Starstruck - Portia Macintosh 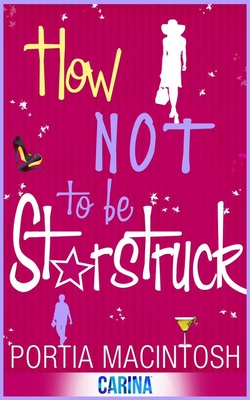 Earlier this month I had the absolute pleasure of reading Portia’s novella, Between A Rockstar And A Hard Place, which introduced us to Nicole (our protagonist) and Dylan, bad boy rockstar! After finishing that one, I was SO eager to read the full length novel and it did not disappoint at all.

HNTBS follows the life of Nicole – a magazine editor, a huge partier and always late. Being friends with bands is a cool job, getting to spend time with the hottest rock stars is not a hard life but with dirty tour buses, screaming fans and having to wear the same clothes for days in a row, it’s not for the faint hearted. When Nicole joins new band on the scene, Two For The Road, on their tour, she quickly finds Luke, one of the band members to be to her liking. But band boys are notoriously bad at monogamy and Nicole isn’t sure she even wants a boyfriend. What are you supposed to do with a boyfriend? She can’t remember. It’s been too long since she last had one. As we follow Nicole, we see her try to fit in with the ‘real’ world again but when she is photographed in a compromising position with her best friend (and newly married) Dylan, she realises that being famous is not all it cracks up to be, and sometimes, being in the shadow of a band is the best place to be.

There were two main things I loved about this novel. Firstly, the protagonist – she was amazing. Secondly, I could not predict any of this plot, at all. I would not have been able to tell you where it was going to end up. Nicole is a perfect protagonist. I fell in love with her straight away and whilst I couldn’t relate to her lifestyle, I loved her honesty and I could relate to her disorganisation, and her observations about the world around her really struck a chord with me. She was feisty but had a very soft and fragile side to her as well which I loved seeing – by the time the book had ended I felt like I knew her inside out. She was fabulous! Nicole developed so well over the course of the novel too, it was almost as though she grew up and became a ‘real’ woman, instead of being the teenager she seemed in the beginning.

Portia has got a real gift for writing. She manages to tell a story in such detail and with such pace that you cannot put the book down, I was addicted to this book and found it hard to step out of the characters world for even a second – I so desperately wanted to know what was going to happen next! Something else that strikes me with Portia’s writing is the honesty and experience with which she writes. Portia herself has been immersed in the rockstar world and it is clear from what she writes about, that she knows exactly what life on the road with a band is like. There were some absolutely hilarious parts of this novel; one involved reversing a van into a wall which I imagine are all loosely based on real experiences which brought a real truthfulness to the plot.

There was an array of hot men in this book too! Some were geeky, some were famous, some were typical rockstars but all of them brought something fresh and exciting to the plot. I loved how Nicole interacted with them all. So often in this kind of fiction, women seem to spend time with other women, whereas I loved seeing the dynamics between one woman and a lot of men. Men make the best friends and best confidantes so I loved seeing this in HNTBS.

Overall, this book is just a delight to read. It’s easy to read, quick to read but has such depth and such a well thought out plot that you can’t help but fall in love with it. I am seriously hoping we might have a sequel to this book in the future and I am definitely keeping my eye out for any other book that comes from Portia’s pen. She’s one to watch out for!

A skilfully written novel exploring the world of rockstars, parties and paparazzi.