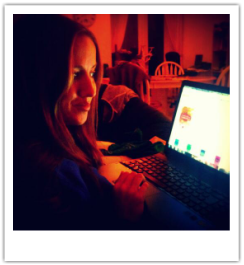 Lisa Dickenson is one lovely lady and this Christmas, she is super excited to be releasing The Twelve Dates Of Christmas!
Lisa's passion for writing started early and she spent the majority of her childhood writing rip off versions of Sweet Valley High and The Babysitters Club on her typewriter. If you want to find out a very detailed and accurate timeline of Lisa's life then visit her website and laugh. Lots.
If you would like pre-order Lisa's 'dates' then click here.
You can also stalk Lisa on Twitter (she won't mind).
She's written a HUGELY funny piece for us today and I hope you enjoy it as much as I did!
You know that feeling when you’re running down the street in the snow and you’re just wearing your knickers and a cardigan, and you stop the man of your dreams as he’s walking away, only it’s not Colin Firth it’s just a stranger and the hair on your unshaved legs is shocked by the cold and someone’s calling the police?

Well that feeling is GIDDY ELATION (swirled with a touch of shame) because you’re recreating your favourite festive rom-coms!  Bridget Jones Diary, The Holiday, Love Actually, Serendipity and Elf all lob great snowballs of romance and sparkle at us at Christmas, but let’s not just watch them, let’s be in them!  Let’s travel about where they were filmed and be in every bloody one of them!

But there’s plenty to see and do before you start flinging your clothes off and telling people to call you Bridget.  Why not start your day with a stroll through the snow-sprinkled village of charming Shere in the English countryside of Surrey, flipping your blonde hair with an imaginary Jude Law at your arm.  Nope, I’m afraid you can’t take him back to Kate Winslet’s quaint little cottage from The Holiday, you Cameron Diaz minx-like wannabe, because it was a fake, built just for the movie.  Never mind, it’s been a lovely morning, shall we go into London?

Come on, let’s head to Selfridges on Oxford Street.  I’ll be Emma Thompson and go off and look for presents for the mothers and you can be Alan Rickman, all frowny-faced and sexy-voiced, and try and buy a gift-wrapped necklace for your HORRIBLE BITCH SECRETARY before I make it back to the jewellery department.  Aaand, go.

The next thing on the list is to go and hang about Heathrow arrivals lounge having a good stare at everyone and imagine them hugging in slow motion, while the voice of Hugh Grant chatters to you inside your head, telling you that Love, Actually, is all around.  But nobody likes anyone who loiters in airports too long, so now would be a fine time to skip on round to Departures and jump on a plane to New York City (why not?  It’s your bloomin’ rom-com adventure now). 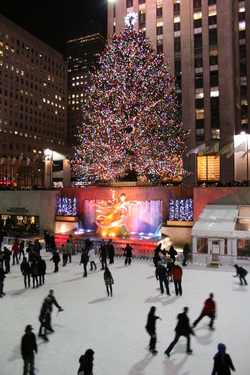 Four Baileys and a huge Toblerone later and you emerge in the Big, Frozen Apple.  Hoorah!  Look at the lights, the buildings, the steam rising from the manholes, the windows of Tiffany’s…  High-tail it to the Upper East Side so you can cocoon yourself in the Serendipity 3 restaurant for a ‘Frrrozen Hot chocolate’ as you sit demurely like Kate Beckinsale and watch the snow falling behind the windows.

Up you get, we haven’t got all day.  Grab a John Cusack lookalike and slide down to the Central Park ice rink for some twirly smooches just to really do Serendipity justice, and then head to Rockefeller for a gaze at the massive, beautiful Christmas tree like Zooey Deschanel and Will Ferrell did on their date in Elf (and Macaulay Culkin did in Home Alone 2, but I don’t think we’ll call that one a rom-com).  Ahh, how lovely.  NOW BACK TO ENGLAND, COLIN FIRTH IS WAITING.

Right, we nearly have to call it a day, but do you have a minute?  We need to stop and write some placards so we can bang on someone’s door in St Luke’s Mews, Notting Hill, blast a cassette of Silent Night and confess our undying love for Keira Knightley.

And we’re done.  There’s plenty more to see and do, plenty more locations to visit, but if you’ve avoided being arrested up until now maybe it would be better to simply quit while you’re ahead.  Well… one more thing.  The dramatic finale.  Go on, take them off.  Take those trousers off.  Mark Darcy is getting away!  He read your diary!  Go, go, go!