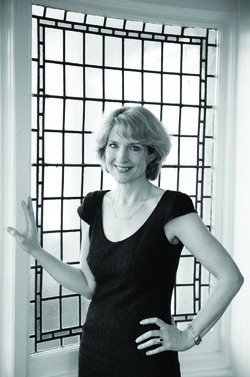 After having the chance to read Jane's latest novel, Black Roses, I was so thrilled that I had the chance to ask her some questions about the novel.

1. Black Roses is a complex novel of love, loyalty and power. For those who haven’t yet had the chance to read it, can you give a brief description of the novel?
It is 1933 and Adolf Hitler has just swept to power in Germany. Clara Vine is a 26 year old Anglo-German actress who arrives in Berlin hoping for a screen career at the world famous Babelsberg studios. By chance she finds herself introduced to the wives of the senior Nazis and in the process becomes privy to all the feuds and gossip that lie behind the regime. When Leo Quinn, a British intelligence agent, comes to hear of this, he approaches Clara to spy for him. Then Clara discovers that Magda Goebbels, wife of the Propaganda Minister, has a truly dramatic secret, one that places Clara’s own life at risk.

2. You mention in the author’s note at the end of the novel that you based a lot of what happened on recorded events. How long did the research process take before you could begin writing?
I did take about two years to write this book, having read everything in existence about women in the Nazi period! I’m fortunate in that there is a huge amount of eyewitness testimony of the tumultuous period when the Nazi regime took over, partly because Berlin had been a home to writers who were forced to flee and wanted to record their experience. But research doesn’t finish when you start writing. I always have a book about the Third Reich on the go.

3. As your novel is set in the 1930’s did you find it hard to capture how it must have felt to have lived in Berlin at that time? Did you visit Berlin yourself to try and picture how it would have been or did you rely on accounts from those who were alive then?
I go to Germany a lot, and I’ve walked the streets of Berlin many, many times. It’s important for me to know the route a character would take, and how long it takes to get from one part of the city to another. Although a lot of Berlin was bombed flat, there are still several key sites, such as the film studios, which remain untouched, and it’s hard to express the fizz of excitement you get when you visit a location where your characters have been placed. When I visit the Einstein café, for example, I virtually expect Joseph Goebbels to walk in with a film star in tow. It’s a strange feeling, as though there are two Berlins before your eyes –the actual one and the imagined one - and as you walk round the city you slip in and out of each.

4. The focus of this novel is less on the ‘popular’ side of German history and focuses on the stories of the wives that never really had the chance to tell their story. Did you feel pressure in trying to portray these women in a certain light?
I definitely felt it was time to tell the women’s story. The Third Reich is such a male province – the politicians, the strategies, the atrocities, but the wives too played significant parts behind the scenes – either in egging their husbands on or in attempting to intercede. What is hard, is writing about women whose letters and diaries you have read, and who you can see as human beings, and yet reminding yourself what they were responsible for. Magda Goebbels, for example, saw her stepfather die in Buchenwald and made no attempt to help him. More generally, I wanted to know what it was like to live as a woman under that very misogynistic regime. Not just for high ranking wives and actresses, but ordinary women who were faced with extraordinarily detailed attempts to control every aspect of their lives.

5. Clara was a beautiful protagonist who grew massively over the course of the novel. Was she based on anyone you read about or was the majority of her character fictional? I would have loved to have known her!
I was partly inspired by the accounts of a couple of young English women who went to Berlin in that time and gradually became aware of the true nature of the regime. But I’m so glad you commented on her growth, because I very much wanted to show her starting out naïve, and then facing moral choices she would never have had if she had stayed at home and becoming more mature and resolute as the scales fall from her eyes.

6. Black Roses isn’t your first novel. Can you tell us a little bit about your other novels?
My other three novels, Patrimony, The Shell House and The Weighing of the Heart, are set in the 1920s and 1930s. It’s a period I’m fascinated in because people found themselves in a moral wilderness after the First World War, reassessing everything they had believed in. All those stories are love stories, at heart, in which people struggle with the secrets of the past. I also like love stories with a sudden turning point where the protagonists, who have resisted their passionate attraction to each other, are forced to accept it.

7. After Black Roses, I am desperate for more! Have you got any other novels in the pipeline that we could expect in the coming year?
So glad you said that! The next in the Clara Vine series, The Winter Garden, comes out in February 2014. It’s set in Berlin and Munich, and the Mitford sisters and the Duke of Windsor have walk on parts.

Quick fire:
What is your:

Favourite colour?
green
Favourite song?
Danny Boy
Favourite book?
Middlemarch
Favourite word?
Serendipitous. Bet everyone says that…
Favourite food?
Baked aubergine
Favourite season?
spring
Favourite TV show?
The Sopranos
Favourite author?
In the flesh it would have to be Philip Kerr, because I’m married to him
Favourite animal?
Cat, no contest
Favourite day of the week?
Monday – a whole week’s writing ahead. Though my children would laugh at me for saying that.


Thank you so much to Jane for her time. I am beyond excited to hear that there is going to be another book about Clara Vine! Hooray!