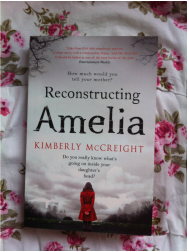 Kate has a busy, demanding job and works non-stop and constantly feels guilty for not spending enough time with her daughter Amelia. She’s frustrated to receive a call from Amelia’s head teacher stating that Amelia has cheated on an assignment and she has just been suspended. The head teacher expects Kate to pick Amelia up straight away and so Kate heads off to the school, annoyed at the disruption to her work schedule.

However, Kate is not prepared for what she is about to find out when she makes it to Amelia’s school…

Her daughter is dead. Amelia has jumped off of the roof of the school and has committed suicide. All Kate can do is wonder why Amelia was so unhappy and how she missed the signs of her daughter struggling. But then she receives a text. A text that says ‘Amelia didn’t jump.’ Armed with this new knowledge, Kate goes on a mission to find out what really happened and uncovers some rather disturbing things along the way…

This was a really thrilling, page turning novel. I was gripped from the very beginning and was engrossed until the very end. The premise is a really interesting one; the age old question of how well do you really know your child? In this case, Kate seemed to not know Amelia as well as she thought she did which made for emotional reading as she tries to come to terms with all the things she didn’t know.

Kimberly has managed to take this idea of family relationships and weave it into a chilling, crime plot with a number of twist and turns along the way.

I enjoyed the small clues that were planted throughout the novel that all culminated in the final few chapters. I was also massively impressed by the climax. I really had no idea of what to expect and even though I had my suspicions, not a single one was correct! It was a really fresh ending that will have the best crime readers wondering how they didn’t figure it out.

I did feel a little cheated to begin with, but, once I had sat back and thought about the book as a whole it actually fell into place perfectly.

The novel is told from Kate and Amelia’s perspectives which made for a nice juxtaposition. The innocence of Amelia’s voice contrasted nicely with the not so innocent and far more worldly one of her mothers. It was powerful to see events unfolding through Kate’s eyes but I think the strongest parts lied within Amelia’s chapters. I thought they brought a lot to the plot.

If you like a crime mystery and enjoy authors like Sophie Hannah or Sophie McKenzie then this would be right up your street.

I will definitely keep my eye out for more of Kimberley’s novels!

A clever, twisted plot that will have you desperate to read into the early hours of the morning just to finish it.