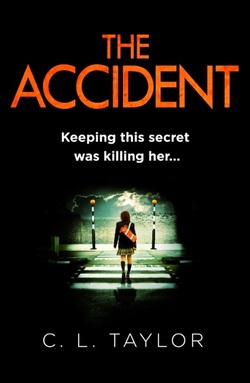 I love a good psychological thriller and whenever I hear about a new debut in this genre I do get very excited! There have been some killer debuts in this genre: Before I Go To Sleep, Close My Eyes and Reconstructing Amelia to name a few. I had high hopes for this book and let me tell you, I was not in the least bit disappointed.

When I first read the blurb I was expecting a novel very similar to Reconstructing Amelia and I was worried it would be a retelling of a mother not knowing her daughter as much as she thinks she does. However, whilst they touch on similar ideas, they are both very different novels.

The Accident starts with protagonist Sue discussing how her daughter, Charlotte, is in a coma after being hit by a bus. Her husband, as well as many others around her, thinks that it was an accident but Sue is sure Charlotte purposely stepped out and is intent on finding out why her seemingly perfect daughter would have resorted to doing such a thing. As Sue delves into her daughters past, she begins to learn that her own past might have a rather large bearing on the present.

I read the first half in the early hours of the morning and it was such a thrilling feeling, reading it in dead silence and minimal light. Taylor has really got some skill in filling her writing with tension and revealing shocking facts which keep you desperately fixed to the page. This book is a perfect thriller. I couldn’t put it down and felt on edge constantly, afraid of what would happen next.

Taylor has got an incredible talent in this genre especially when it comes to her characters. Every single character was a puzzle: I never knew who to trust, who to be wary of, who to listen to; every single one of them was an enigma and I LOVED that. I found myself hanging on every word and nuance, trying to second guess the author and work out who was in fact the person to believe. Each character developed incredibly well over the course of the novel and I loved seeing the effect one single person can have on the lives of so many other people.

The book was told through chapters in the present day and then entries from a diary Sue kept in the early nineties. I really liked being able to see Sue in two different lights: one as a young woman and one as a mother on the edge; it was a lovely juxtaposition.

Taylor has excelled in writing this book and I can honestly say it is going to take a LOT to beat this book this year. I am so excited about what else we can expect from Taylor in the future!

A hauntingly realistic psychological thriller that will keep you up into the early hours.