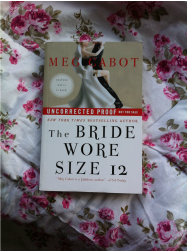 Meg Cabot is the incredible author who wrote the YA series The Princess Diaries. Until I was contacted about The Bride Wore Size 12, I was completely unaware she had a series of adult fiction. They are based around a character called Heather Wells and whilst I've never had the chance to read any of these books before, I am hoping I will be able to read the others in future. I believe that this book is the last in the series so it was nice to see how everything turned out and you could easily read this as a stand alone novel but I'm sure reading the others in the series before this one would be a good idea. You'd have more of a clue about the characters and their backgrounds which would probably add a lot more to the plot.

In this novel, Heather Wells is working as an accommodation manager at a university (I am assuming this is a job she has had in the previous novels) and she is stressing out about the new students moving in. There are still RA's to train, rooms to set up and not to mention a member of royalty is joining the university too. With so many things going on, it isn't long before something goes wrong. Something terribly wrong. A new student is found dead in their dorm room and now every single resident in the building is a suspect. Not only does Heather have to deal with frustrated parents and a dead student, she also has the stress of her wedding coming up! Can Heather juggle her work and home life whilst trying to solve a murder?!

The only experience I've had with Meg is The Princess Diaries, which I read a long time ago, so I was interested to see how she wrote for adults. I have to say I enjoyed this book a lot but there were a couple of points where I thought things could have been a little better. Firstly, the build up to the solving of the murder was a little bit anti-climactic. There wasn't much of an explanation as to why what happened, happened and I was a little offended by the use of the word 'madman'; mainly because it is implying someone who is 'mad' would kill. A little bit offensive to those with mental health problems. (Anyway, I am taking off my mental health campaigner hat and sliding my book reviewing one back on!!) Also, I found another resolution in the book to be a little confusing (that of the Prince) because it struck me as completely random and not explained enough. However, this could be, like always, down to reader interpretation.

I enjoyed Meg's writing style, it was easy to follow and nicely paced. There were a few american-ism's that I didn't quite understand, but, again, completely down to the reader. I liked Heather as a character; she was certainly strong and was more than happy to stand on her own two feet. My kinda girl! I often feel annoyed when authors portray women as weak and in need of a man to help them out but there was no danger of that happening in this book! Heather's finance Cooper wasn't overly active in this book; the only times we met him were in the beginning and then again towards the end. I liked the character of Lisa who was Heather's work colleague. She was funny and I liked the way she grew quite a lot across the novel.

The ending to this novel was sickly sweet (I loved it) and I'm sure that for fan's of Heather they will be ecstatic by what happens.
Like I mentioned previously, I think this is the last book in the series, so although I won't have the chance to read future books about Heather, I would be interested in going back and meeting her from the beginning. I don't know what Meg has up her sleeve for other adult novels but they would definitely be books I'd read.

Weddings, murder and a prince. What more could you want in a novel? Join Heather on her last adventure before she tries to achieve her happy ending.