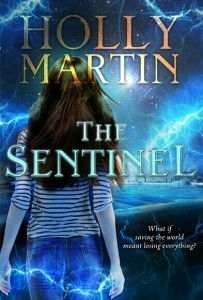 It is rapidly dawning on me that I have wasted a huge chunk of my life by refusing to read fantasy novels. And this book is just one example of why.

Eve is a normal seventeen year old girl on her way back from a school skiing holiday in France. Everything is seemingly average until the coach she is travelling on ends up dangling over the edge of a cliff. Two of her teachers rush to help Eve to safety but Eve is confused: why are they so focused on rescuing Eve and no one else on the bus? Things start to get even stranger as her teachers have the ability to hold the bus and stop it from falling and as Eve soon discovers, so does she.

Very quickly she becomes aware the two teachers are called Guardians and that they are there to protect her at all costs. When she returns home it soon becomes apparent that everyone around her is there to protect her. Even her dog, Quinn. Slowly she unravels the mystery and finds out the reason why she needs to be protected and why people are out to get her.

This book hooked me, from the second I started reading I couldn’t put it down. I even read it whilst I ate my breakfast this morning and I ended up trying to put a spoonful of cereal up my nose. I  was dubious about starting this book at first because even though I’ve seemingly fallen massively in love with the fantasy genre, I was worried this book would confuse me and leave me back at square one. I needn’t have worried for this book was so engrossing and wrapped it’s large arms tightly around me. Everything was explained perfectly which meant I was able to follow the story extremely easily and do a lot of gasping and swearing when things started happening!

The plot moved at an alarming pace which kept me on the edge of my seat the whole time. I was expecting it to unravel slowly but I loved the adrenalin filled plot that it turned out to be. My heart genuinely started to beat faster in certain parts; I was so immersed.

Without a doubt, this book contains some of the most intriguing and lovable characters I have ever read about. Eve is charming, kind, shockingly mature and beautifully sympathetic. Seth, her best friend is everything you could ever want in a best friend: loyal, kind and protective. The supporting cast of characters are just as fantastic and I found myself warming to Quinn and Eli especially quickly.

I loved Holly’s style of writing. It wasn’t overly laden with superfluous descriptions and scene filling; every sentence was crucial to the narrative and each one flowed seamlessly into the next. My favourite kind of story is one that can give you vivid descriptions of the settings but also keep the story moving. Holly nailed this.

There are going to be another three books in this series and I cannot tell you how desperate I am to read them! The Prophecies will be out in April and I for one cannot wait!

A fast paced, thrilling fantasy about saving the world, love, friendship and everything in between.