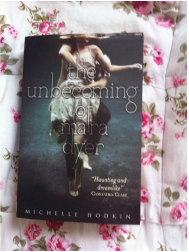 Don’t you hate it when you read a book and then not really have any idea what you’ve just read?

This has just happened. I’m not quite sure I can get my tiny mind to understand the plot of this novel. Slowly, little bits are falling into place and making a bit more sense but I still have so many questions that I want answers to!

Mara wakes up in hospital with absolutely no clue what has happened and why she is lying in a hospital bed with tubes coming out of her. As she gains consciousness she is made aware she was in an accident that caused the death of her boyfriend and two friends and that she was the only one to make it out alive. Her doctors suggest that moving house and starting at a new school could help her to get over what has happened and start her life again. However, things don’t quite go to plan and Mara suddenly starts to realise she isn’t what she thought she was. Why can she see the faces of her dead friends? How can she see people’s deaths before they happen? She doesn’t know and one thing is for certain, the most gorgeous boy she’s ever laid eyes on, Noah, is going to be one hell of a distraction…

This really isn’t a genre I would gravitate towards; it’s a YA with a supernatural, thrilling, romantic, mystery aspect to it! I wasn’t really sure how the plot was going to progress and because the majority of the books I read are grounded in reality, I found it hard to let my mind wander into the supernatural and believe that what was going on was real.

For this reason I didn’t feel much of a connection to the protagonist. Mara was a complex character and at times I found it hard to understand what was real and what wasn’t; perhaps this was the intention of the author? However, it left me feeling confused and unsure about what I was actually supposed to be understanding from the book. Mara went through some situations that others could relate to; starting at a new school, trying to fit in, keeping on top of school work etc. As I am slightly past that stage in my life I found it hard to really feel a strong connection to Mara but I imagine for YA readers it would be incredibly relevant.

I liked the character of Noah and, although he was also confusing at times, I liked his cheekiness and dedication to Mara. He was quite the charmer and I’m pretty sure lots of YA readers would have completely fallen in love with him.

Michelle’s writing was a little difficult to follow at times, quite probably a flaw with the reader here and not her writing. It seemed to lack a bit of flow at times and I found myself having to pause and re-read certain paragraphs to understand what had happened or what relevance something had just had within the plot.

I don’t want to put you off of this book at all though because I would be so interested to see what other people have made of it. This is the first in a trilogy and I wouldn’t put off reading the two other books as I would love to see how Mara’s story continues. There was a bit of a cliffhanger at the end of this one which added to my confusion a little but would be great to explore in The Evolution Of Mara Dyer.

Overall this is a YA book with a unique plot which contains likable characters and an addictive story-line that keeps you reading on and on.