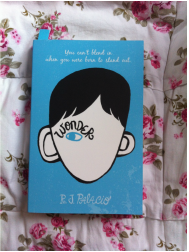 I don't quite know if I will be able to do this book the justice it deserves.
At the beginning of the year I saw this book advertised on Goodreads and I was really interested in discovering what lay on these pages. I forgot about it for a while and it wasn't until Books Are My Bag day that I saw it sitting in Waterstones and I was like a moth to the flame! I couldn't pick it up quick enough; I didn't even read the blurb or look at the cost, I just knew I had to read it. As always, I am a little dubious of books that are showered with praise and when I read a quote from The Times on the back of the book stating 'Wonder, is destined to go the way of Mark Haddon's The Curious Incident of the Dog in the Night-Time and then some.' I wasn't sure if it would live up to such comments but I needn't have worried; it didn't disappoint.

August is different. He doesn't look like all the other kids; he was born with severe facial abnormalities and makes other kids his age run away from him. He has been home-schooled his whole life and when his mum and dad suggest he gives school a go, he can't think of anything worse. Propelled by his parents and sister, he decides to try and make it through a day at school. As August predicted, people don't know what to do around him, they don't know what to say and they often whisper behind his back. All August wants is to be seen as the same, he wants people to like him for who he is inside and not be judged by his face.

August is a fascinating and incredibly smart character who, even though is incredibly different through physicality  is not so different from the majority of children who will read this novel. I'm positive that every single child goes through a phase in their lives when they feel like the odd one out; when they feel different. Palacio explores this idea in depth and uses August as a way to get the main message of this novel across: be kind to everyone, just because people may look different or may seem different, there is no reason to be unkind to them.

I adored this novel for so many reasons; it made me cry, it made me smile, it made me think; it touched me in so many ways.

The cruelty of some children was shocking and it made me sick to think that people can be so judgmental and prejudiced towards a person who looks different. I think it is so important that children grow up knowing that individuality is a gift and a positive thing, instead of it being something that singles someone out and sets them up for bullying.
Wonder is told through the eyes of all the main characters, August, his parents, sister and friends. It was a really nice change to see how each character reacted to the events in the book and to see their honest opinions about August. Palacio writes in an engaging way which draws the reader in and doesn't give them up easily. This is a book you can sit down with a finish in one sitting. Whilst Wonder is predominately aimed at children, it is a book you can pick up and enjoy at any age.

I urge you to go and buy this book now because it will touch you in so many ways.
I really cannot do this book justice, it speaks for itself.
I'll leave you with one of my favourite quotes from the book:
“I think there should be a rule that everyone in the world should get a standing ovation at least once in their lives.”

A touching, honest, addictive, beautiful, heartfelt exploration of the notion of being different told through the eyes of one of the most gorgeous young boys.