You Against Me - Jenny Downham 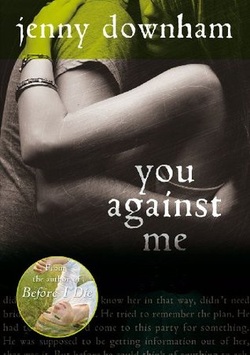 Years ago I read Before I Die by Jenny which was a powerful and incredibly moving book that stuck with me for a very long time after I’d finished it. It was a beautiful story about making every second count and so when I saw Jenny had written another book I was intrigued to see how upset this one would make me!

The subject matter of this book is one that can’t be taken or written about lightly and I was left feeling satisfied with the way Jenny treated the subject and the sensitivity that she demonstrated. Whilst rape was a serious theme that ran throughout the book, the main story was of two teenagers meeting in unlikely circumstances and trying to navigate a treacherous path to a future they wanted to spend together. It was a coming of age story set against a bleak backdrop that made the two teenagers and their relationship seem like a shining beacon.

The characters were well created and Mikey and Ellie developed beautifully as the story progressed. The secondary characters also went on some remarkable journeys and I found my opinions changing about certain characters as the book continued. There were a few characters who I found intolerable for the entirety but I feel they were perhaps supposed to come across in a negative light.

Jenny’s writing was sublime and I found myself hooked very quickly. My only issue is that I would have loved the book to have been longer and follow the characters so we could see what the verdict of the trial would have been. There were a few little places where the book lacked pace but this didn’t seem to affect the book at all because the rest of the novel moved at such a fast pace, it was nice to have some slow paced sections.

I gave this book four stars because I didn’t fall in love with it as much as I was hoping to but I got a lot from it and even though this is classed as YA fiction, I think any age group will be able to pick up this book and take a lot from it.

A worthwhile read about love, in all of its forms.